Berel Lang, Professor of Philosophy and Letters at Wesleyan University will give a lecture on Raphael Lemkin and the idea of genocide. Co-sponsored by NC State's Jewish Studies department and the North Carolina Jewish Studies Seminar.

To view video of the panelists, visit the NC Hero YouTube channel.

Sol Lurie had no idea that he was about to be murdered with other Jewish prisoners by Nazis. Mr Lurie can only describe what happened next as a miracle. He now shares his Holocaust experience in which he endured at least 6 concentration camps. Join Mr Lurie as he shares his stories of triumph during difficult times. 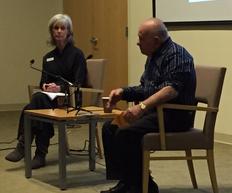 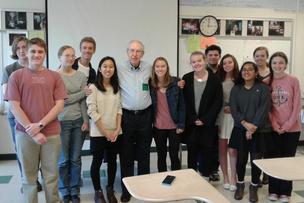 By the Holocaust Educators Network 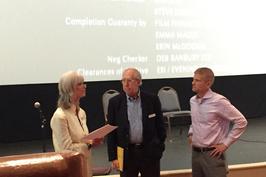 Rabbi Rachel Brown and The Magnolia Klezmer Band will tackle the question, "What Does It Mean to Be Jewish?," during a free public talk and concert on Nov. 1 at Jordan-Matthews High School.

"What Does It Mean to Be Jewish?" begins with Rabbi Rachael Brown of Greensboro discussing the faith and what continues to define Jewish identity. She also will provide a brief background on the persecution of Russian Jews at the turn of the 20th century, including their migration to Europe and America -- essential themes in "Fiddler on the Roof."

After a brief intermission with refreshments, The Magnolia Klezmer Band takes center stage for a 40-minute concert of traditional Jewish music.

200-word essay required for placement (see below for details)

This program offers teachers an opportunity to broaden and deepen their knowledge of the historical context of the Holocaust. Focusing on best practices, appropriate strategies, and meaningful resources for instruction, you will gain an understanding of the precursors, events, and consequences of the Holocaust. Teachers will also have the unique opportunity to collaborate with veteran Holocaust educators from across the state, drawing on years of experience and expertise. Learn how best to convey this history and the meaning that it can have in the lives and civic practices of students.

Four days of substitute teacher costs are covered. Applicants must exhibit a seriousness of interest in the subject matter as expressed in an essay that is reviewed by NCCAT staff as a part of the application process.

Visit the NCCAT site for more information and to apply.

The UNC & Duke Chabad invites you to join them for an Evening of Remembrance as Rabbi Nissen Mangel recounts his harrowing story of survival in Awschwitz. Commemorate, Relate, and Be Inspired! Mangel, a renown scholar, author, speaker, and philosopher was sent to Auschwitz when he was just 10-years old–making him the youngest inmate at the camp. He survived four other concentration camps and three encounters with Dr. Josef Mengele, the Angel of Death.

Cosponsored by the Chabad at UNC-CH/Duke, UNC Hillel, AEPI, SRL, CUFI, and the Carolina Veterans Organization. 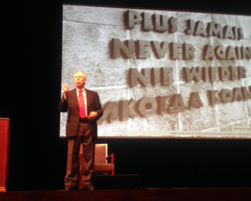 A story about Julius Rosenwald, president of Sears, Roebuck, and Co., who used his own wealth to help fund over 5,000 schools for African-Americans in the South during Jim Crow era. The Rosenwald Fund supported great artists like Marian Anderson, Woody Guthrie, Langston Hughes, Gordon Parks, and Jacob Lawrence. Pre

Film Screening and Discussion with Aviva Kempner: Rosenwald: the Great Story of a Jewish and African American Partnership in the South During Jim Crow
November 7th, 7:00pm–9:00pm
William and Ida Friday Center for Continuing Education

Aviva Kempner's film tells the incredible story of Julius Rosenwald, who never finished high school but rose to become the President of Sears. Influenced by the writings of Booker T. Washington, this Jewish philanthropist joined with African American communities in the South to build over 5,300 schools during the early part of the 20th century. Inspired by the Jewish ideals of tzedakah (charity) and tikkun olam (repairing the world), and a deep concern over racial inequality in America, Rosenwald used his wealth to become one of America's most effective philanthropists.

Visit the Carolina Center for Jewish Studies for more information.

Sol Lurie, of Monroe New Jersey, will provide a firsthand, eyewitness account of his teenage years spend in numerous

concentration camps. Sol is visiting our community for the Thanksgiving holiday and has graciously agreed to share his

harrowing experiences with us.

Please contact Lana Onypchuk at the JCC for more information.

The Mitzvah Project: a one person play and lecture exploring one of the most astonishing stories from WWII
Tuesday, November 29th, 2016, 7pm
Elliot University Center Auditorium, UNC-Greensboro

The Mitzvah Project is a three-part presentation consisting of an original one-act, one-person drama (The Mitzvah); a post-performance lecture and audience discussion led by Roger Grunwald, the program’s co-creator, actor and child of Holocaust survivor. Through one soldier's story, The Mitzvah reveals the startling history of tens of thousands of "partial Jews" who served in Hitler's military, most of whom were discharged in 1940. However, a few thousand who had an "Aryan appearance" and who were deemed “valuable to the Reich’s war effort” were exempted from the Nazi race laws. A “Declaration of German Blood” (a Deutschblütigkeitserklärung) — signed by Hitler himself — allowed these select few thousand mischlings to fight for the Nazi cause. Most died in battle. The talk traces the fateful chronology of Jews in Germany from Moses Mendelssohn, through the arrival, in the late 19th and early 20th century into Germany, of over a hundred thousand Jews from the Pale of Settlement (so-called Ost Juden), to the rise of Hitler.Sponsored by the Jewish Studies Program and the Communication Studies Department at the University of North Carolina, Greensboro in collaboration with the Alfred and Anita Schnog Family Foundation.

"Defying the Nazis: The Sharps' War," A new film by Ken Burns and Artemis Joukowsky to air on PBS
September 20, WUNC-TV at 9:00pm

Defying the Nazis: Sharps' War is a new 90-minute documentary co-directed by Ken Burns and Artemis Joukowsky that tells the little-known but incredible Story of Waitstill and Martha Sharp, an American minister and his wife who spent nearly two years in Europe saving hundreds of refugees and dissidents fleeing Nazi occupation. The program will air on September 20th at 9pm (check your local listings) on PBS.

Screening of the film Denial
October 23, 2016 at the Carolina Theatre

The Center would like to thank all those who came for making the screening of Denial such a success! Over two hundred people in attendance! And a big thank you to Prof. Neil Siegel!

Co-sponsored with the Duke Center for Jewish Studies. Academy award winner Rachel Weisz stars in this riveting, true-life drama about the courtroom showdown between historian Deborah Lipstadt and notorious Holocaust denier David Irving. The film is based on Lipstadt's book, History on Trial: May Day in Court with a Holocaust Denier. Neil Siegel, Professor of Law and Political Science at Duke Law School, will join us for a post-screening discussion. See our event flyer and/or contact Rose Mills for more information. Watch the Trailer

Jean-Yves Camus of the Institut de Relations Internationales et Stratégiques will give a lecture on the state of anti-Semitism in France in 2016, with a look back to the start of the Second Intifada, when anti-Semitism in Europe reached an unprecedented level. The lecture will also look at the perpetrators of anti-Semitic violence and the continuity of the prejudices underlying that violence. Jean-Yves Camus is Director of the Director of the Observatoire des Radicalités Politiques (ORAP) and Associate Researcher at Institut de Relations Internationales.

Visit the Carolina Center for Jewish Studies for more information.

Experiences of the Holocaust

By the Mandel Center of the United States Holocaust Memorial Museum 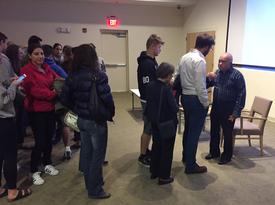 "Witnessing the Witnesses: Teaching the Holocaust When The Survivors Are Gone"
Chapel Hill Public Library