The Never Again Education Act was signed into law by the United States Congress on May 28,2020. The act provides $10 million of funding for Holocaust education in the US. The money will be administered over five years by the U.S. Holocaust Memorial Museum.

“Passing this bill by unanimous consent today sends a strong message that the Congress is overwhelmingly united in combatting anti-Semitism and hate through education,” Rep. Carolyn Maloney (D-N.Y), the lead House sponsor, said in a statement.

The legislation enjoyed broad bipartisan support. “Passage of the bill could not have happened without the tremendous support of so many groups across faith and party lines,” said Sen. Jacky Rosen (D, Nev), a key sponsor in the Senate. Joining her was Sen. Kevin Cramer (R-ND), from a state with a small Jewish population but who saw this not as a Jewish issue, but as an American issue.

The new law expands education programming about the Holocaust nationwide, allocating $2 million annually through the USHMM.

The full text of the bill, H.R. 943 – Never Again Education Act, can be found here:https://www.congress.gov/bill/116th-congress/house-bill/943/text

H.R. 943 Bill Summary:
• Expands the US Holocaust Memorial Museum’s education programming to teachers across the country, requiring the Museum to develop and disseminate accurate, relevant, and accessible resources to improve awareness and understanding of the Holocaust and educate individuals on the lessons of the Holocaust as a means to promote the importance of preventing genocide, hate, and bigotry against any group of people.

• Funding will support and expand a centralized website maintained by the Holocaust Museum where educators can find curriculum materials. Funding through this bill may also be used to support teachers in bringing the lessons of the Holocaust into their classrooms in other ways, including developing, disseminating, and implementing  principles of sound pedagogy, increasing engagement with state and local education leaders to encourage the adoption of these resources, and evaluating and assessing the effectiveness and impact of Holocaust education programs.
​
• Funding may also be used to support an expansion of the Museum’s professional development programs, through activities such as local, regional, and national workshops, teacher trainings with Holocaust education centers and other partners, and engagement with local educational agencies and schools.

• Authorizes $10 million dollars over 5 years to go to these activities. 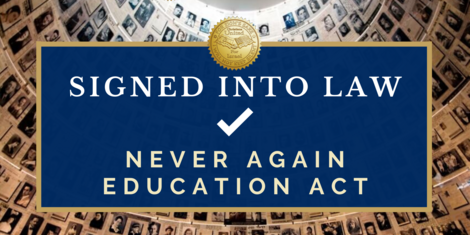